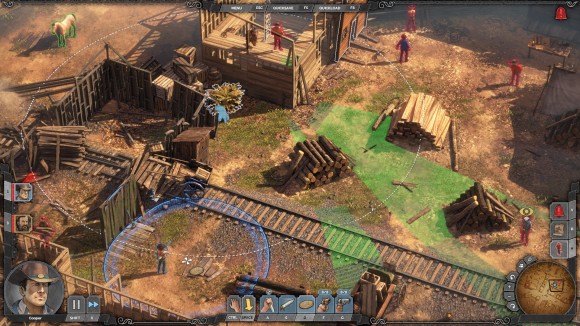 It’s taken me the better part of a year to get around to Desperados 3. This may seem a little odd given how much I liked Shadow Tactics, the previous game from Desperados 3 developers Mimimi; however, there’s a few reasons for that, first and foremost of which is that, historically, I haven’t liked Westerns as a setting for videogames. I’ve played a few across a range of different genres — Red Dead Redemption, Call Of Juarez: Gunslinger and Hard West are the ones which immediately spring to mind — none of which struck me as being particularly bad, but none of which I managed to stick with for more than a few hours. This is strange because I am quite a big fan of movie Westerns, particularly anything from Sergio Leone, but I can never take them seriously when they’re transplanted into a videogame; matching the mechanics to the setting is always a sufficiently contrived process that I end up feeling like I’m wandering around inside a knockoff version of Westworld and quit shortly afterwards.

This is why I never took the time to go back and play the original Desperados games, and it’s a big part of why I’ve dragged my feet on installing Desperados 31 until now. I’m glad I did though, because now that I’ve finished it I’ve realised two things: