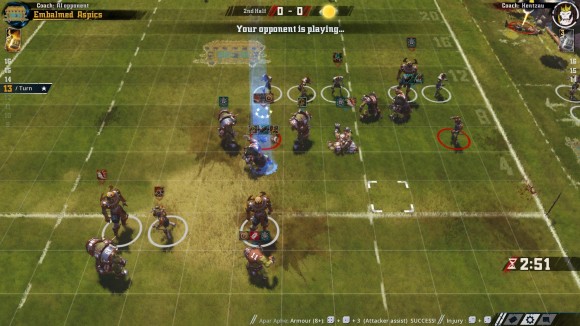 In this age of Steam shovelware and low-effort mobile ports it’s difficult to remember a time when we weren’t awash in terrible adaptations of various Games Workshop properties. These days you can’t throw a rock without hitting a digital version of one of their Specialist Games from the ‘90s – Space Hulk, Mordheim, Adeptus Titanicus, Man O’ War, Battlefleet Gothic and so on — and with the notable exception of Battlefleet Gothic all of them have ranged in quality from “sub-par” to “indescribably awful”. Years before the floodgates opened, however, there was Cyanide’s 2009 adaptation of the classic American-Football-but-with-Orcs punch ‘em up Blood Bowl, which was a game that got a headstart on everyone else through a surprising application of copyright infringement1. Unlike the many games that followed it Blood Bowl didn’t piss about trying to figure out how to convert the board game into something more appropriate for a videogame, and instead just ported the board game rules across on a 1:1 basis. This proved to be an unusually successful approach, for two very good reasons that I’m surprised the later GW adaptations (including some of Cyanide’s own) didn’t pick up on. One is that while it was far from perfect Cyanide had managed to balance automating away most of the cruft that slows down a physical game of Blood Bowl while still preserving the board game feeling with stuff like highly visible digital dice rolls. The other is that people liked the old Specialist Games for a reason, and Blood Bowl is the best of the lot. You don’t need to go tinkering with the gameplay to make it work. It already does.

As long as you have somebody else to play it with, anyway.

END_OF_DOCUMENT_TOKEN_TO_BE_REPLACED Battlefleet Gothic: Armada is an 18th century tall ships naval combat simulator that just so happens to be set in outer space.