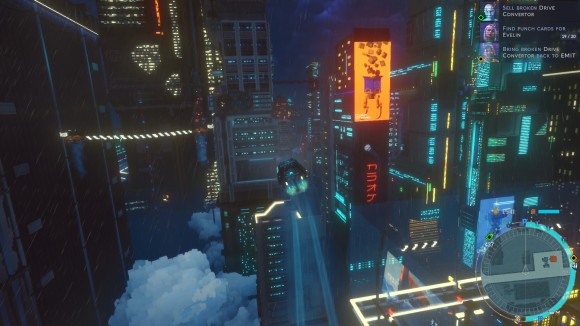 I really, really want to like Cloudpunk. You’re playing Rania, the driver of a flying car in a cyberpunk city on her first day of work for underground delivery organisation Cloudpunk. You drive around the city, taking packages from point A to point B, while people talk to you over the comm about the city, the world, corporations, identity, AI, androids, the rich getting obscenely richer, the poor being trapped by debt and prejudice and left to die the moment they’re not economically useful — all of that classic cyberpunk shit that’s becoming uncomfortably real as we hurtle headfirst into a capitalist dystopia of our own. Where modern “cyberpunk” properties tend to co-opt the look but not the themes, Cloudpunk at least understands what cyberpunk should be. It’s clearly a labour of love made by real people who have been on the receiving end of some of this stuff themselves, and unlike certain other big-ticket cyberpunk releases that are scheduled (for now) to come out this year, Cloudpunk’s heart is definitely in the right place.

I just wish it was a better game.