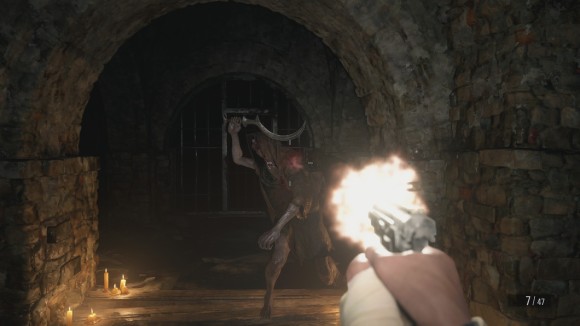 Well, this is embarrassing. I told myself I wasn’t going to buy another Call Of Duty after they switched back to doing their oh-so-tedious contemporary settings, but with the werewolves and the giant castle this newest one at least looked a bit diff – wait, what? This is a Resident Evil game?

END_OF_DOCUMENT_TOKEN_TO_BE_REPLACED Okay, look. I liked Resident Evil 3 as much as anyone did at the time. It’s a game that’s almost totally missing the creepy character and atmosphere of the earlier Resident Evil titles, and whose truncated development process ensured that it had a tremendous overreliance on both generic outdoor environments and recycled locations from Resident Evil 2, but the idea of the Nemesis was a good one back in 1999 and after two games of painstakingly conserving bullets and shotgun shells it was fun to unload on zombies with the assault rifle the game hands you from the start1. Despite that, and despite loving last year’s remake of Resident Evil 2, I found myself quickly becoming skeptical over the announcement that they were going to release a similar treatment of 3 just over a year later. That’s nowhere near enough time to develop a modern videogame even if it was in preproduction before the Resident Evil 2 remake released, and so my expectations for the Resident Evil 3 remake were correspondingly low.

Given that, it’s actually a little surprising that Resident Evil 3 still managed to comprehensively disappoint me.

END_OF_DOCUMENT_TOKEN_TO_BE_REPLACED In which Capcom try to repeat Resident Evil 2’s success by resurrecting another console classic from ages past. Except this time, it doesn’t go anywhere nearly as well.

END_OF_DOCUMENT_TOKEN_TO_BE_REPLACED It looks like there’s something up with the brightness on my primary monitor as the screenshots I took for this review are all far darker than they appeared when I was actually playing the game. Resident Evil 2 is certainly dark, but it is not this dark — I will try to tweak my brightness settings and capture some more representative shots tonight.

I don’t believe I’ve ever talked about Resident Evil on here, and for good reason: unlike what appears to be the entire rest of the world I hated Resident Evil 4 and have singularly disagreed with the direction the series has gone in since then, with the prioritisation of anime knife fights and suplexing zombies over slow-paced B-movie survival horror. (Not that suplexing zombies isn’t awesome, but it’s really not what I want out of a Resident Evil game.) Still, I wouldn’t have had a problem with that tonal shift if I hadn’t liked what the series was doing up until that point;  I really enjoyed the first three Resident Evil games  – especially the first one, with the legendarily terrible voice acting and the tremendously cheap live-action cutscenes — and so my reaction to the announcement that Capcom were remaking Resident Evil 2 in the Resident Evil 7 engine1 was rather mixed. The preview footage looked interesting, sure, but it didn’t look all that much like what I recognised as being Resident Evil 2, and while Dark Souls has demonstrated an appetite for the slower, more thoughtful style of the old Resident Evils I was a little sceptical that Capcom could resist the urge to (for example) put in a quicktime event where the main character punches a boulder to death.