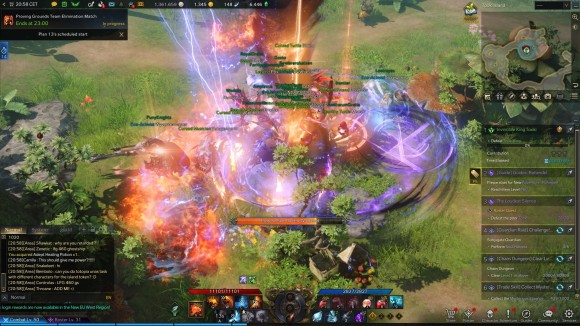 If you asked somebody to look at five minutes of Lost Ark footage and then pigeonhole it into a genre, the one they’d probably pick is the ARPG. This would be an entirely reasonable choice, as Lost Ark certainly heavily resembles an ARPG, with a fixed isometric camera and punchy hotkeyed combat abilities that tear apart vast swarms of dozens of monsters all in one go. I don’t think it’s the correct one, though, since the core loop of kill monsters -> get loot -> kill bigger monsters that underpins the entire ARPG genre just isn’t here.

If you asked somebody to look at five hours of Lost Ark footage and then pigeonhole it into genre, the one they’d probably pick the MMORPG. This, again, would be an entirely reasonable choice. Once you’re out of the tutorial zone, no matter where you go in Lost Ark, you’ll be constantly surrounded by other players. A lot of them will be bots. Even more of them will be morons. But there’s very little overlap between you and them; pretty much the entire game can be played solo if you want, with interactions with other players mostly being entirely optional. And the group content that Lost Ark does have hasn’t exactly impressed me. No, I don’t think Lost Ark is a particularly good MMORPG either.