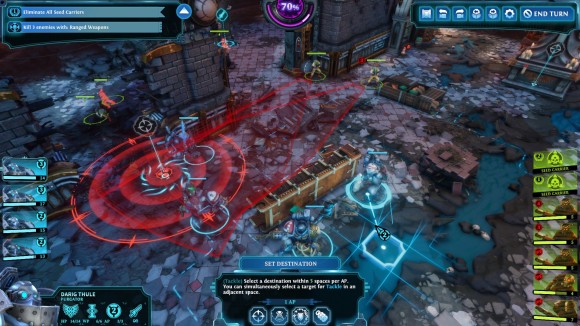 Warhammer 40,000: Chaos Gate – Daemonhunters (good lord that’s an unwieldy name) is a game I’m convinced I brought into existence by force of will alone. It was announced as part of a big Warhammer videogames event around this time last year, and my friends were having fun guessing what each game trailer was supposed to be before the title card flashed up. But me? I was just guessing “Chaos Gate 2!” on every single one, mostly because the idea was so absurd — who would make a semi-sequel to a shonky 40k XCOM clone from 24 years ago that barely anyone played at the time? — but also secretly because Chaos Gate is one of the two games from the late 90s glut of 40k titles that I do actually want a reboot/sequel to1. And this meant I damn near fell off my chair when the words “CHAOS GATE” appeared at the end of the Daemonhunters teaser, like the universe had finally got tired of my constant complaining and spontaneously reshaped itself into a place where Chaos Gate 2 could exist in a futile attempt to get me to shut up, and in fact it left me questioning the nature of my reality for several days afterwards — after all, if Chaos Gate 2 was actually happening then nothing is impossible.